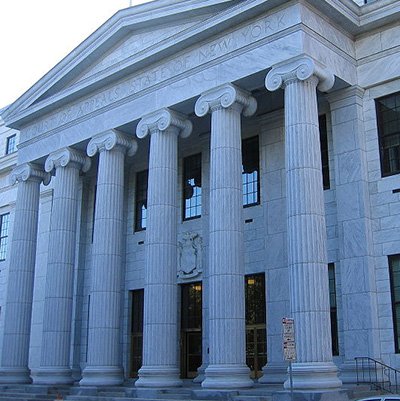 In February of 2015 End of Life Choices New York filed a lawsuit, Myers v. Schneiderman, to establish Medical Aid In Dying as a right under current law or under the New York State Constitution.

We believed that this litigation was the path that offered the greatest chance of success in achieving our long time goal: ensuring that terminally ill New Yorkers have the choice to end their suffering with prescribed medicines.

The plaintiffs included, in addition to EOLCNY, a woman dying of ALS, a man dying of AIDS, a lawyer with cancer, four prominent New York physicians, and Judy Schwarz, PhD, EOLCNY’s Clinical Director. After the lawsuit was filed two of the patients (Sara Myers and Steve Goldenberg) died, but while they were still alive they testified in videotaped depositions.

The lawsuit asked the court to find that physicians who provide a prescription for medication to a mentally competent, terminally ill patient – which the patient could consume to bring about a peaceful death – should not be subject to criminal prosecution under existing law which prohibits assisting another to ‘commit suicide.’ The suit argued that the choice of such a dying patient for a peaceful death is not ‘suicide’ and the physician does not assist such a patient in ‘committing suicide.’

The plaintiffs also asserted constitutional claims; New York’s courts have long recognized a fundamental right to self-determination with respect to one’s body and to control the course of one’s medical treatment. The case presented substantial issues under the Due Process and Equal Protection Clauses of the New York State Constitution.

The attorneys who represented the plaintiffs were Kathryn Tucker, the country’s leading litigator on Medical Aid In Dying, and the highly respected law firm of Debevoise & Plimpton. Kathryn has been involved in virtually every important lawsuit in this arena. For almost two decades she was the Director of Legal Affairs for Compassion & Choices. She now is Director of the End of Life Liberty Project. Ed Schallert, one of the nation’s leading litigators, directed the Debevoise team.

After our lawsuit was dismissed by a lower court, we filed an appeal to the Appellate Division, First Department. In February of 2016, we asked that court to reverse the lower court decision dismissing the case. Unfortunately, in May of 2016 the court affirmed the lower court ruling. We then filed an appeal to the Court of Appeals, New York State’s highest court. In September of 2016, that court ruled to hear the appeal of our case.

Oral arguments were heard on May 30, 2017. If the appeal had been successful, the case would have been sent back to the trial court for further factual development and then an evidentiary hearing. We then would have had the opportunity to have a full factual record developed, with oral testimony from our plaintiffs and experts, and a reasonable chance of success on the merits.

“The Court of Appeals, in allowing this case to proceed, took a key step forward toward allowing the patients and physicians who brought this case to present compelling facts before the important issues are decided,” said Kathryn Tucker, plaintiffs’ co-counsel.

“We were optimistic that when the Court was made aware of the suffering facing patients, the profoundly personal reasons motivating their desire to choose a more peaceful death, and the fact that when the option is available, end of life care for all patients improves, with no harm to anyone, it would rule in our favor."

Unfortunately, on September 7, 2017, the Court of Appeals upheld the lower court decisions. It rejected our claim that the current statutory provision that bans assisting a suicide does not apply to the process of Medical Aid In Dying. And, it did not find that terminally ill patients have a right to Medical Aid In Dying under either the Due Process or Equal Protection Clauses of the New York State Constitution. The case was dismissed. A motion for reargument was denied.